Bonita M. Sparks Adams has been used as a vessel “TO DELIVER” people from what has been holding them back. It is her desire and prayer that when you read one of her books, attend one of her plays, or sit in one of her classes, you will receive one or more of the following:  Teaching, Open Heart, Devotion to God, Encouragement, Love, Inspiration, Victory, Elevation, and/or Revelation.

Bonita holds an Honorary Doctorate of Ministry from Ramah Institute of Theology. As an active member of Walls Memorial Chapel AME Zion Church, she serves in many capacities. She holds a Bachelor of Education from the University of Toledo, Toledo, Ohio, Licensure in Comprehensive Business Education and Vocational Education, and is an accomplished high-school business teacher being nominated for Ohio Teacher of the Year. At her high school, she serves in many capacities.

Bonita is also an award-winning playwright. She has won several awards from Urban Playwrights United. Her play, “Obama Looks Back” was featured in the D.C. Black Theater Festival, and her play “My Mother Prayed for Me" has won an award at the A Taste of Theater Festival held at Indiana University.

Bonita also serves as a producer. She has written, produced and directed over ten stage plays, in addition to spearheading numerous Black History programs, dinner murder mystery shows, skits, puppet shows, and talent & fashion shows. Her play, “Exposed,” which features her husband, James L. Adams as the devil, has been performed for over 20 years. Her company has collaborated with many others to bring stage plays, award programs, DVD screenings and film premieres to her local area and abroad.

As an entrepreneur, Bonita and her husband, James, founded JAB Transportation LLC, JAB ETM Productions, LLC (James and Bonita Exposing Truth Ministries Productions, LLC), and Write The Vision Publishing, LLC. She conducts classes and workshops, is a consultant and a speaker. She is also a Mary Kay Beauty Consultant. She is the proud mother of LaTosha (Jason) and Tamika (Lukasz), and grandmother to Aria and Krystian James.

-Miracles: They Happen Every Day

-Exposing the Truth About the Holidays thru Drama

-Exposed Bible Study Guide (An accompaniment to the stage play) 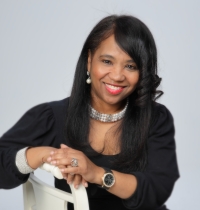 Do It Right The First Time - Publish and Market Your Bestseller